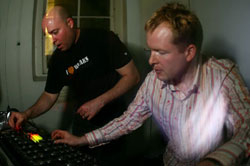 Progressive-Sounds: The artist album is on the shelves now. What is your favorite track on the album, and what makes that stand out for you?
Mark: I know it sounds cheeky but I probably have to go with 'This is Momu'. That was really our first original track that we were like, woah, heck yeah we are really onto something. It was also the first track with Jondi that I felt like I had grasped enough of the studio to feel like I was pulling my weight. Before that…it was just "Oh that would sound cool" or "Is there a way to do X and Y?" We really got on the same page creatively with 'This is Momu' too. It's funny because the original title I came up with was 'This is Trance'. That was in 2001 so…it was Our Breakbeat Trance man! But at that point we felt we had our sound so, there it was, 'This Is Momu', Welcome to our first single. Adam Freeland kindly charted it in Ministry Magazine and the calls started coming. Jondi was used to all the commotion but it was all new to me and in a way still is. I'll never forget that time or how blessed I am to have met Jondi & Spesh. As a drummer, I was stunned by how many drum sets can fit in a Mac. My favorite track in another way is 'See It Thru' since it's a love song for my wife who has been amazingly supportive. I'm going to stop now since I'll come up something about every track.
Jondi: I think 'Hydergine'. It was one of those tracks where the melodies came together really quickly, basically having the record button on while jamming on keyboards and getting incredibly LUCKY.

Progressive-Sounds: Are there any re-releases that had a lot of work done to them that you would like to point out?
Mark: There was definitely a load of remastering of some of the tracks due to some nice new studio gear that allowed us to go back into some of the previous singles and take another look at doing some more "conditioning". The Dive mix was really the Radio/Video Edit and it had some frequency mods to work better on the TV instead of the club or home stereo so we worked on that.

...friends that are not in the progressive or club scene...were always saying we needed to get the sound out into the cars and home stereos too.

Progressive-Sounds: Are there any key players, influences or inspirations in the creation of the album that you would like to recognize?
Mark: Absolutely, firstly Alysoun Quinby who was our vocalist on 'The Dive', and Ruin, Nosmo and McRae from Grayarea for slinging it out with us on 'One' Nosmo played guitar and it rocks. 'Mavericks' for being the sickest surf spot, plus all my friends that are not in the progressive or club scene that were always saying we needed to get the sound out into the cars and home stereos too.
Jondi: I think Mark has covered it. Alysoun has a really enchanting, magical voice. The Grayarea guys are really bright and fun to work with. Too bad they are alcoholics and destined to end up in rehab.

Progressive-Sounds: What are your inspirations behind the music you create?
Mark: Often we get inspiration from amazing places on Earth. In keeping with that we paid Homage to Maverick's/Half Moon Bay on the Norcal Coast and did a track called 'Antietam' that was inspired by the bloodiest battle of the US Civil War. We found some recordings of ghosts from the battlefield…they sound wild. We have good luck with location inspired tracks. Previously we memorialized 'Donner Pass' for Bedrock and 'Kitty Hawk' North Carolina for Functional. As far as influences for me personally that may or may not manifest in our sound depending on your ear, I'd have to say Depeche Mode, Front 242, Nitzer Ebb, Jane's Addiction, Way Out West, Ashtrax, Misfits, Consolidated, New Order, Chemical Brothers, FSOL, Eric B/Rakim, Public Enemy, Coldcut, Pixies, The Cult, Atmospheric DnB like LTJ and Hospital Records, Cure, Smashing Pumpkins, Hybrid and even U2. I love late 80's to mid 90's alternative too. XM Satellite Radio is like heaven, I'm hooked. As far as DJs that originally inspired me to connect with Jondi and start mashing progressive and breaks probably came after seeing Rabbit in the Moon, listening to Adam Freeland's first commercial mixes, Hybrid's Hooj Choons and Renaissance remixes, Hyper's Deep Progressive Beaks series on Distinctive and of course Sasha and Digweed's Northern Exposure compilation as well as all of Nick Warren's Global Underground albums. Much respect to all of these folks.

I won't repeat the list and give myself carpal tunnel. Let me just throw in Skinny Puppy.

Jondi: I basically write music because I'm a fidgety, discontent, easily distractible person and the process of making tracks puts me in a more or less OK place. Inspiration is from other music, more or less entirely, and to some extent natural environments, but usually I'm in an artificial environment so I don't even know if I should count that. Looking at Mark's list I see that we like many of the same bands so I won't repeat the list and give myself carpal tunnel. Let me just throw in Skinny Puppy.

Progressive-Sounds: Are there other projects or upcoming releases that you are working on right now (even with other people) that we should be aware of?

I've been working with a fine chap in San Francisco who produces as Dirtyhertz.
Mark: I've been working with a fine chap in San Francisco who produces as Dirtyhertz. We have finished an original called 'Revival' that is coming out on Looq as well as our first remix of Momu 'One' for Jon Lisle's M-Theory which is my first foray into non breakbeat. Dirtyhertz is an amazing producer. His Beatles 'Tomorrow Never Knows' remix gets me every time. We are 2 for 2 so I'll bet we make some more magic. Josh Gabriel and I have talked on and off about doing something but have yet to make it happen. I'd like to see some more collaborations for the next Momu album. Maybe Lee Burridge and Momu will finally get together for the Wasabi Freaks project. Nobody on earth, other than Lee, can eat as much Wasabi in one sitting as me. That is a fact.Jondi: I'm of course continuing to make tracks with Spesh, we're working on a single right now called 'I Love The Drums' (or Drugs, we haven't decided). It's more or less a "go-to" peak time track. Spesh and I are both using it a lot in our sets. I'm also working on an indie project called "Good At Human" with the incredibly talented Sez Giulian. We're both songwriting and arranging, she's playing guitar and viola and bass, I'm producing, we're both singing (thank fucking god for auto tune in my case, best $399 I ever spent). 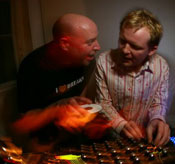 Progressive-Sounds: What, if any, overlying themes do you try to bring out in the music of Momu as a whole?
Mark: Good question. While we are working on stuff I'm always thinking "Future Funk" in my head if that makes sense. We definitely go for a futuristic, deep, heady sound. That is no accident. There are also dark and melancholy elements, even if we try we can't seem to get away from that but I think the album shows a wide spectrum with the new tracks like 'Donkey Rocket' and 'Torque' pointing in a new direction.
Jondi: I'm not sure I understand the question. Can instrumental music have themes? How 'bout "the ephemeral and illusory nature of self".

Progressive-Sounds: What is in the pipeline for Momu?
Mark: On March 17th we get the "Ableton" and EFX set up for a night with Nick Warren in San Francisco, and possibly some WMC dates if I can get down to Miami this year. Travel with a new baby is tough but I would not trade fatherhood for anything, it's been the most amazing thing. There will be some cool remixes off the Album. Tim Fretwell is stepping up first with a remix of the lead single, Hydergine. I can't wait to hear that. Looq is lining up some other cool remixes too. We have completed a top secret remix of… well I can't say now can I? You will have to listen to the mixes we are doing for John Digweed. He has asked us to prepare a mix for his new Podcast. He has been so great to us. There are going to be other Momu guest mixes airing on the Web, Satellite, and traditional radio. Later this month we are doing a 3 hour show on Stanford University's station so we will record that too and get it up for download.