Progressive-Sounds: The Dark Globe story, much like other groups stems back to a "meeting of minds", where you both got together and realized there was a common connection on which the group could develop. How did you first come to meet, and what made you decide to form Dark Globe?
Matt: We were at the same school together and kind of knew each other from being in the music hall jamming, Pete was in a band with my brother. After leaving school our paths didn't cross until the early 90's. Pete was in a psych punk band and Matt had started producing noise and had released a few hardcore & electro records. We were re-united through a love of noise, sampling and Public Enemy.

Progressive-Sounds: After the issues that originally surrounded plans for the albums release on Island Records, looking back, would you describe that period of time as a setback, and how did it feel to be able to negotiate to finally bring it out on GU Music?
Matt: It was a new experience for us being on a major label, everything being on a much bigger scale, with more people to please and more expectation, but we don't consider that period involved with Island a setback as they were good for us reaching out to a wider audience which we achieved to a degree.
Pete: We have trouble musically standing still and I think they really struggled to know what to do with us continually changing and after a while we became this break-driven-cockroach driving them to distraction.
Matt: GU on the other hand are much more in tune with us and open-minded, all their channels have been set up and growing for over 10 years. It's an exciting time to be involved with them as they continue branching out into working more on artist albums. 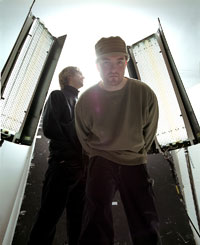 Progressive-Sounds: The album features a range of different vocalists, including Amanda Ghost, Julie Thompson and Boy George, which to me reflects the wide range of influences that you both have? What was it like being able to work with Boy George, and how did the chance come about?
Pete: We've worked with George before on the 'Auto-erotic' single and we'd been waiting for another opportunity, we came up with the original idea that it was going to be a three way collaboration with Antony [ of the Johnsons fame ] but that didn't work out although we had some interesting late night email conversations with Antony about what that track was going to sound like… 20,000 leagues under the sea using animal voices as instruments. I think that'll end up being a whole album project rather than a one off.

We also got to work with Tom Verlaine of NYC's Television fame on this album who's one of our heroes, he did some sterling 'twang' work with singer Imogen Andrews on 'Everybody fades'.

Progressive-Sounds: Music Week describes 'Nostalgia For The Future' as moody and brooding, but if you had to describe the album yourselves, what would you sum it up as?
Pete: We really just let ourselves be creative on this album, see past the boundaries, take throwaway elements and try infuse them with something timeless. We might use the sample of a performers just audible breath after he's finished the last note of a Chopin Nocturne or the silence in between the words of a reading of Sylvia Plath poem. Life is so much more vivid at those extreme moments in life, the moments of sadness and loss, some of those intensities have hopefully been bottled on this album. 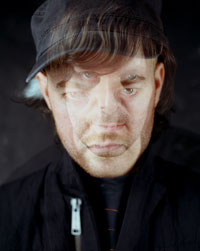 Progressive-Sounds: With the extensive number of tracks and remixes you've done, what would be the standouts for you, and if you had to pick some of your favorite remixes of your own work by other people, what would they be and why?
Matt: Standouts would be, Ascendor, Mondo Scuro, Arnica, Break My World + (DG Flypast remix), DG mix of Orbital 'illuminate', Hardkiss & Cagedbaby mix of 'Break My World' & Jazz musician Ben Castle's mix of "Atoms"

Progressive-Sounds: Finally, what can we expect from the upcoming tour, and what lies ahead in the near future musically from yourselves?
Matt: we've both grown up playing in bands so playing dark globe live is something we've always looked forward to. I think with this album we've really got something to express, so we're excited about taking it out on the road. Dark Globe live will consist of four players, multi talented and essentially able to drive, which could come in handy getting back in one piece late at night…we'll be joined by some of our featured guest vocalists with a few surprises from the better known ones... see you down the front!
Pete: Musically we've already started on some new vocal tracks which'll be a lot more bluesy than NFTF, it's a toughie finding the right singer for the right tracks - that tends to slow things down but we really don't want to take as long as 'Nostalgia' with the next one any Billie-Holiday-like singers please get in touch.